ROBERT CHRISTOFORIDES, was born in London in 1942. 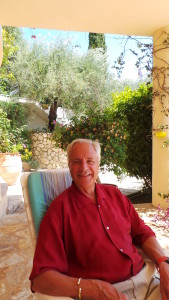 He was educated at the Abbey School, near East Grinstead, Sussex, Westminster School and the Law Society’s College of Law.   He qualified as a solicitor in 1965 and remained in practice until semi-retirement is 2010.   His life-long central interest has been music.

In 1992, he decided to take a serious interest in Wilfred Owen.

He obtained Jon Stallworthy’s ‘Wilfred Owen – The Complete Poems and Fragments’, which transcribed the manuscripts left behind by Owen at his death on 4th November 1918.

It appeared to him, from his training as a forensic lawyer, and inspired by the completions of Mahler’s 10th symphony,  Bruckner’s 9th symphony and (justified by the later completion of) Elgar’s 3rd symphony,  that it was ethically possible, just like music, to render many of the fragments into reading versions of poems with which the general reader was wholly unfamiliar.

Further, it transpired that some additions or elaborations could also be sensibly made to poems hitherto published in apparently ‘final’ form.

Further, he was able to construct, from the fragments, an at least provisional ‘completion’ of ‘Strange Meeting’; this also, after forensically inspecting the relevant manuscripts at the British Library and The English Faculty Library, Oxford.

He has also produced new and insightful elaborations of ‘Spring Offensive’.

Overall, this work produced about 80 ‘new’ or additional poems.

That work done, and after an extensive study of Owen’s extant letters, he embarked on the writing of ‘biographical-novel’ extracts of Owen’s life.

These texts were written over 20 years, during which he carried out extensive research, which included several visits to all relevant places important in Owen’s life in Britain and France.

This writing gradually expanded into an epic novel on the life and times of Wilfred Owen.  This monumental novel (over 3,000 pages on Kindle) commences with Owen’s birth, and the situation immediately preceding it, and ends with his death and its immediate aftermath.

Robert Christoforides lived in London until 1996 and  since then he has lived on the Hampshire-Dorset border.